This information is culled from 119 screen dumps of a Facebook conversation on Whitney Wood’s (now Flaherty) page, over five days in January 2016.   Adam Guerrero dominated this exchange, appearing in over 100 of the screen shots  and, according to other participants, was abusive.    The 119 screen dumps may be downloaded.    They are cross referenced according to the 35 people engaged in the conversation and the 21 categories of abuse flagged in the discussion.

We are almost apologetic for including this material.   It is truly awful, like watching a train wreck, and we present it as an exercise in trolling.

Adam Guerrero tried to make the point that the story of Whitney’s assault is irrelevant, and only he possesses the bravery and friendship with Black people to be able to make relevant comments in a city which is 70% (sic) Black.

Towards the end of the interchange, Stephanie Diane Ford joined the conversation in screen shot 080. Stephanie Diane Ford, until recently, had been AG’s girlfriend, and SmartMule’s business manager.  She recounted a story where three youthful charges of Adam Guerrero assaulted her at Guerrero’s house on 11/11/2015.   Guerrero dissembles and obfuscates.  Finally, starting in screen shot 111, for seven screen clips (until 117), Stephanie added seven screenfuls of information relating to the incident.

The incident involved two Guerrero proteges, JC and ST.   These young men, who were about 19 to 21 years of age at the time of the incidents, were former students of AG from a previous teaching job.   They were part of AG’s entourage.     They had been coming to Adam’s house for almost six years in 2015, which puts the start of their relationship around their tenth grade. 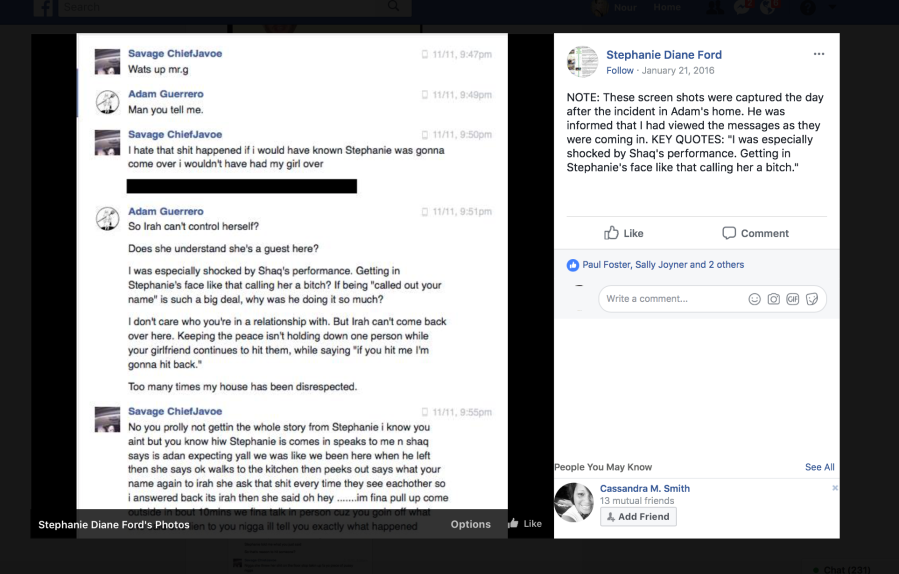 The screen shots provide the story.   Guerrero, JC, ST, and IG, JC’s girlfriend, were in Adam’s house, on the afternoon of 11/11/2015, per screen shot # 113.   Adam left the house leaving the three lounging, partying and packing honey.  Adam met with Stephanie and then they split up, Adam going to a store and Stephanie proceeding to Adam’s house.      IG had been sitting on a sofa with her backpack on the seat beside her.   Stephanie approached, moved IG’s bag to the floor, and sat down beside her.   IG objected to her backpack being moved, and a melee involving all four people broke out, in which Stephanie was slammed into the wall.  The police were called but Stephanie did not press charges and no arrests were made.   Adam Guerrero arrived at the house after the police had departed.

Focusing on two of these screen dumps, we see, #113: in which Adam Guerrero says, as part of a 11/12/2015 Facebook conversation  with  Stephanie and his proteges: “Y’all might be the first case ever of being violent while being high on weed”.

It follows that Adam Guerrero, while in loco parentis, had fallen into the habit of allowing students to lounge in his house unsupervised.  The November 2015 incident happened almost six years after they were his students, but the relationship had continued.

If the young people had been stoned when Adam got back to the house, and they had continuously been in the house since Adam left, in all likelihood they had weed when he left and had been getting high in his house.

Stephanie Diane Ford confirms that the young folks had been smoking a blunt when she arrived.    When I asked her why the police who answered the 911 call did not smell the weed, she replied that she had kept the police outside in the yard.

Adam Guerrero is on record as favoring pot legalization.   When I visited his house in November 2016, I noticed a few pot seeds and stems on his coffee table.  I inquired if he had grown the pot and he denied it.

In conclusion, Adam had been in the habit of allowing young people, students and former students, unsupervised access to his house, and on at least one of these occasions, he knew that the young people were high on weed.   He was their teacher, and “in loco parentis” when he first met these students, and, at the time of the incident, a mentoring relationship existed with the young people by virtue of their job description of “interns” at SmartMule LLC, Guerrero’s private business entity.    When a practicing teacher has an intern, an “in loco parentis” relationship is assumed.

Guerrero was a teacher at Libertas Montessori School at the time of the incident.   It is not known if very young children from the Montessori school had visited his house that year, or if his interns had smoked weed in their presence.   In addition, in our previous SmartMule article, we photographed many very young people working for SmartMule and it is also not known of any of these young people visited the SmartMule business office while weed was present.

Adam Guerrero has been spoken of favorably by many of his students and former students.     We don’t know how much his laissez faire attitude to his “in loco parentis” obligation contributed to his favorable student reviews.    In this Change.org petition, many parents of his Libertas students and SmartMule juvenile associates sang his praises.     Would those parents have been so supportive if they knew about Guerrero’s process for tempting his students into his home, and his attitude to supervision?

Incidentally, our first post on the subject came four days after he was fired from Libertas.  The reason why Libertas fired him was not made public, but we challenge Adam Guerrero to release any documents Libertas gave him as part of his personnel file while firing him.    Our information is that the reasons given for the firing were ample and adequately documented by Libertas management.

Note:   We present these young people via their on-line pseudonyms, and the incident described is now covered by the statute of limitations.    All potential criminal incidents in these texts are moot, either because there was a conviction, or charges were not preferred or because the statute of limitations has expired.   These disclosures were public knowledge before I wrote this.   No snitching is involved.   Everyone involved in this presentation has taken a position for marijuana legalization for persons over 21.

The underlying discussion involved Adam Guerrero haranguing  Whitney Flaherty because she was featured as an abuse victim and was not black, like the abuse victims that Guerero had braved Black communities to encounter.    Stephanie Diane Ford proved that Guerrero had been involved in, and failed to prevent or redress, an acknowledged assault on her, a Black woman, while under his protection as a guest in his house.     During his five days of trolling on the issue, he had performed at least a dozen different categories of abuse and engaged in shameless self promotion.

One thought on “Adam Guerrero, master troll, in loco parentis”