On the evening of Friday 6th July, 2018, Keedran Franklin was arrested by Organized Crime Unit detectives.  OCU is part of the Multi-agency Gang Unit (MGU) which is a joint operation of MPD and the Sheriff’s Dept.

En route from Midtown to his south-east Memphis home, Keedran stopped at a friend’s house near Sharpe Ave. and Robin Hood Lane, and pulled in to a nearby driveway to turn around.  Two police vehicles blocked him in the driveway with their dome-lights on, and two detectives, probably OCU (Organized Crime Unit) emerged.

The story is taken up in the Commercial Appeal, Tri-State Defender and the Daily Kos.

Franklin got out of his car and one of the police who had blocked the driveway lunged at him with handcuffs, injuring his left elbow and right wrist and arm.

One of the OCU police told him “You’re lucky, bitch, we was going to do you.”

Franklin was afterwards taken to the ER, where a dressing was applied to his left elbow and he was treated for cuts and bruising on his right wrist and arm.

While Franklin was being taken down, up to 20 additional OCU police arrived on the scene.

The police claimed they smelled marijuana and used this as a probable-cause excuse to search his vehicle.  This is a classic MPD move for turning a profiled traffic stop into a 4th amendment evasion and an arrest.   It’s a large part of the reason why black men are arrested at three and a half times the rate of white men.

Franklin was cuffed and detained at the scene while officers searched his car.  They found nothing.  Later a canine unit arrived on the scene and a dog sniffed the car.  At that point, 114.7 grams of marijuana and 19 grams of psilocybin mushrooms were found “somewhere around the back seat”.

The substances were planted in his vehicle by MPD.

Franklin was transported to 201 Poplar, with a detour to the ER for treatment of his injuries.

Incidentally, MGU and OGU officers don’t wear body cams and TNT did not get his phone out before being cuffed, so we don’t expect video of the arrest.

The case number is 18016596.  Keedran was booked on Friday and an arrest affidavit sworn, although it is not yet on file in the County system.   Bail was set at $3000 via a video arraignment Saturday morning, and Franklin was released a few minutes before midnight on Saturday.  His arraignment happened at 08:30 Monday morning in front of Judge Tim Dwyer.

Franklin is a founder member of Memphis Coalition of Concerned Citizens, an activist group which arise after the 2016 Bridge protest.  CCC has at least thirty affiliated groups and has created C3 Community Cooperative, an urban gardening project.  CCC runs regular Books and Breakfast events and has done things like distribute food and free movie tickets among the poor.

Our April blog, about C3’s hoaxes played on Law Enforcement, details the events that led up to Franklin’s previous misdemeanor arrest, also at the hands of OCU.   Franklin’s 4/3/2018 arrest is thought to be a snatch squad action designed to remove Franklin and other CCC leaders and prevent a faux-scheduled occupation of the bridge at 6:30 that evening.

Fake information had been released about the Bridge occupation which we tracked all the way up to the  Tennessee Homeland Security commissioner.   This was the most recent of a long list of CCC feints and surprises for law enforcement.   Tenn. Highway Patrol had stationed 50 troopers at the Memphis Welcome Center on 7/9/2017 while CCC was holding a one year anniversary of the 2016 Bridge occupation.   The Hernando de Soto bridge is the achilles heel of Tennessee law enforcement.

The Bridge, once more.

This weekend, word had again gotten out that CCC was planning another Bridge occupation on Saturday July 8th at noon.  We’ll put in new ORRs on Monday to see what MPD and the Fusion Centers have been saying.   The rising frustration among LE at CCC’s ability to ring the changes on protest locations has become very apparent.

The real event planned for Saturday was a potluck at First Congregational Church on Cooper.

Was the OCU action in arresting Franklin another pre-emptive strike designed to remove the leadership and “prevent” another Bridge occupation?  Did the call to “rid me of this turbulent priest” come from the highest levels of MPD and the State?

Cover-up at the CA?

This is perhaps the strangest event of the weekend.  The CA had published Franklin’s arrest story on-line at about 2 PM Saturday, and this headline appeared on the front page in Sunday’s edition.   But the print edition’s page 4 did not carry the story, no anywhere else in the paper.

Is the fix in.   Did the CA pull the print version of the story as a favor for someone in the City or MPD.  The story was finally published on Monday 9th.

UPDATE 7/9/2018:  Mark Russell, Executive Editor of the CA, emailed me to day that the Sunday omission was inadvertent “It appears that the wrong page A-4 was picked up the press room and that story did not run as planned.”   Human error.

We plan to update this story as the facts come in.

Update 7/11/2018:   TNT’s case is scheduled for preliminary hearing on 7/23/2018.  Veteran duo of civil rights attorneys Scott and Bruce Kramer are working on his case. 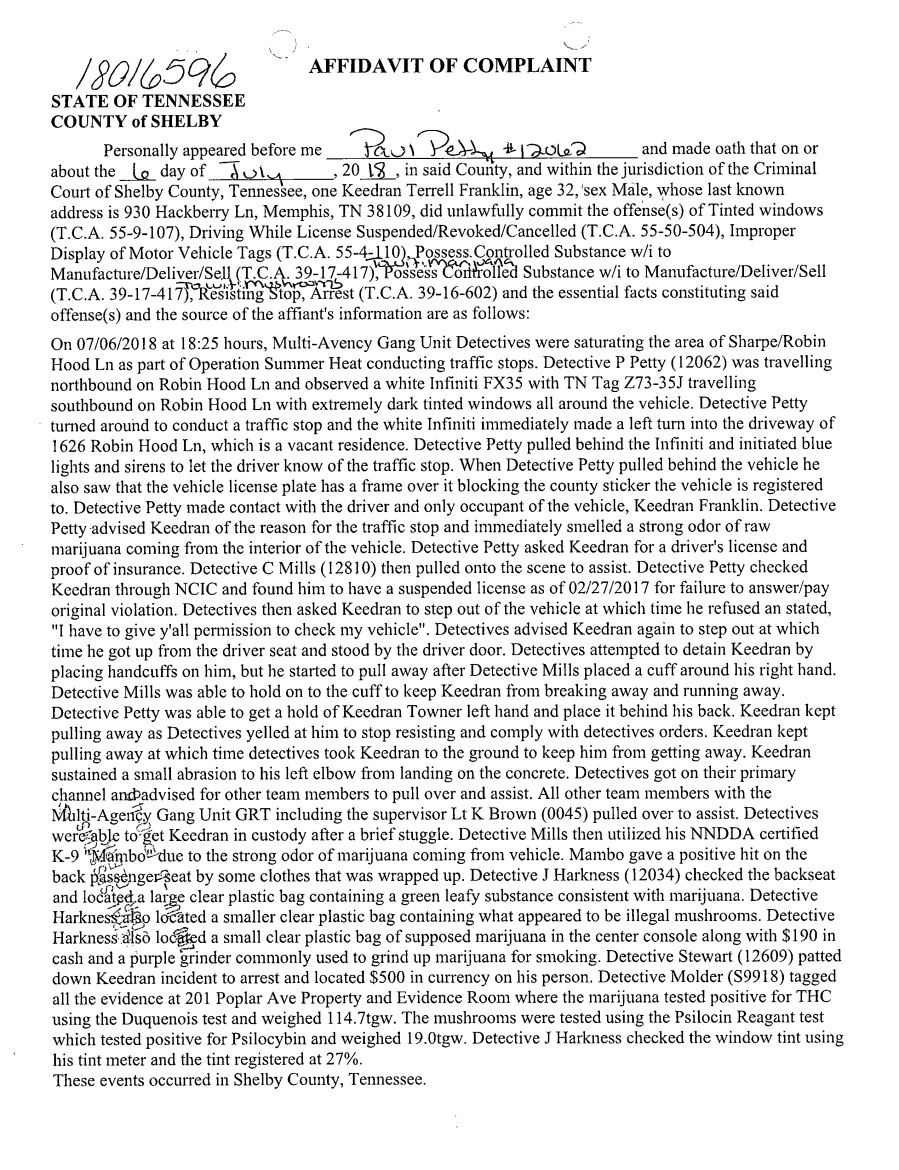