We have another Authorization of Agency case to share, this time that of Dan Rosson, against whom Memphis Animal Services, in collaboration with City Chief Operating Officer Doug McEwen, have created an AoA.  Once again, the City has used AoA to silence a political opponent.

AoA and the City Blacklist.

Authorization of Agency first came to public attention when the City’s Blacklist was published on half a dozen AoA forms.  Placement on Jim Strickland’s AoA was purportedly in retaliation for a December 19th Die-In action at Strickland’s, but it contained over forty activists’ names, far more than the ten or so protesters at that action.  The list was correctly interpreted as a City action against a list of activists which MPD was managing in contravention of the 1978 Kendrick Consent Decree.   The ACLU took the City and MPD to court and won.

We publish some research on Authorization of Agency, compiling almost 1,700 AoA records obtained from MPD via Open Records Request.   While 84.9% of the AoA victims were  African Americans victims of police racism, a few, featuring Hunter Demster, Maureen Spain and myself were clearly in retaliation by the Zoo and MPD for harmless political speech.  In my case, I was on two AoAs, one issued days after my 2016 arrest at the Zoo, which was judged by the courts to be a wrongful arrest, dismissed and expunged.   My second Zoo AoA was illegally created by forging my name to an existing, pre-signed AoA with Hunter Demster, after we uneventfully visited the Zoo.   Again, this was an act of political retaliation, supported by MPD files collected in violation of Kendrick.

Last week, we wrote about Rodney Fisher’s AoA at DHL/Nike.  In this case, Mr. Fisher’s employer used MPD to inform him that he had been fired, in retaliation for political speech at his place of employment.  The MPD Lieutentant Colonel who ordered the patrolman to inform Mr. Fisher was quoted as saying he had been targeted for non-existent “threats” made via social media, indicating that Mr. Fisher’s first amendment speech on political subjects had been investigated, and that a social media search had been performed by MPD.

Now, we have a new AoA of concern, against animal activist and dog rescue volunteer, Dan Rosson.   In this case, city employees at Memphis Animal Shelter and City Chief Operating Officer, Doug McGowan, were behind the retaliatory use of AoA. 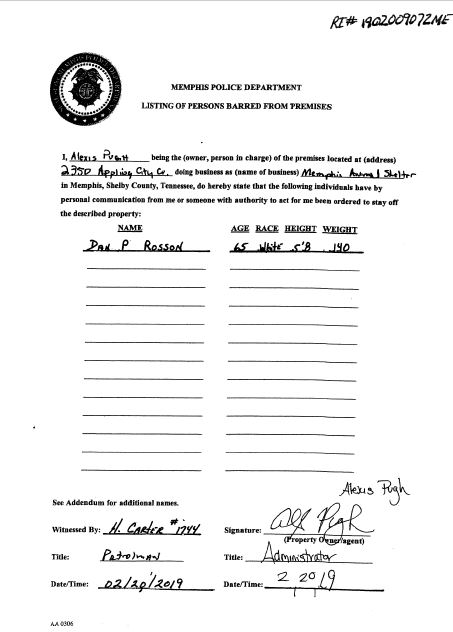 Dan Rosson was a long-time volunteer at Memphis Animal Services.  He was a dog foster, caring for shelter dogs at his home, and performing various tasks at the shelter.   He photographed dogs and helped document their temperaments among other valuable services that saved money for the City and the lives of many dogs scheduled for euthanasia.

Mr Rosson recounts an incident at a Collierville vet, when a dog, which had been secretly labeled as potentially vicious by MAS. attacked another dog.   Rosson subsequently, at an April 2018 MAS advisory board meeting, called for volunteers to be warned about dogs labeled as problematic.   Mr Rosson, in the following months, also shared a long list of administrative issues at MAS that he wanted addressed.

On February 13th 2019 Mr Rosson posted on Facebook about some critically ill pups who needed urgent veterinary treatment.   He had been banned from transporting animals and no-one else was available to drive the pups to the vet.

On February 14th, Mr Rosson circulated a petition to volunteers and others, and engaged in first amendment protected speech critical of the City administration of MAS.  The petition asked the City to promote due process and prevent First Amendment abuse by MAS officials, naming  MAS director Alexis Pugh.

On February 18th, Mr Rosson posted that City Chief Operating Officer Doug McGowan had allegedly called Rosson’s former employer, University of Tennessee.  Mr Rosson is retired from UT but had availed of the customary policy of allowing retirees to continue using their UT email.   UT canceled Mr Rosson’s email account with resultant chilling effect on his ability to engage in free speech on this issue.

On the 20th, Mr Rosson received some Open Records Requests information from the City attempting to clarify the MAS policies on administering volunteers and asking for records on his own case, and the petition was delivered to the Mayor and City Council.   That was the day the AoA was signed by Alexis Pugh.

On February 21st Mr Rosson was informed that he would be arrested if he set foot at MAS and was informed of other charges made by Pugh against him.   These additional charges might constitute illegal acts but were not recorded (as sometimes happens) as marginal notes on the AoA.  This suggests that MPD was maintaining other documents relating to Mr Rosson.   This implies the existence of an investigation, which, being likely to uncover political information relating to Mr Rosson’s communications with the City and MAS, should have been approved by Police Director Rallings pursuant to the Kendrick Consent Decree, which had been well aired in Federal court by this time.

The accusations made by MAS management, if they could be substantiated, should have resulted in a police investigation.  Mr Rosson has not been charged with any offense relating to alleged incidents at MAS.

We believe that Mr Rosson’s case is an clear example of AoA being used by MPD to harass political opponents of the City, which is a pattern we have been seeing  lot of.

Note on Authorization of Agency.

If you are told, by MPD or property management, that you will be arrested if you set foot on a given property, ask if you are on an AoA.

If you are on an AoA, you can get the document for free via the City Open Records portal.  You need to specify a date range, which should be a few days before and after the date you are informed.  You need the address of the premised, and also the MPD precinct and ward in which it is located, which you can look up in the link.

Sometimes AoAs are placed without informing the victim.   In this case you find out about it at some later point, when you visit the premises.   In that case, figure out when the AoA was placed and straddle that date in your open records request.

Share your AoA adventures with us.  If you feel that the AoA is the result of an MPD investigation not approved by the Director, or if its deficient due process is being used to threaten or intimidate you, or to impede your constitutional rights, contact the MPD Court Monitor. Read our AoA information.   If you are arrested for trespass on an unposted location without being given notice to depart, share this information with your attorney.

4 thoughts on “Dan Rosson placed on AoA by City”

The 2018 lawsuit which ACLU fought and won has produced tens of thousands of pages of documents. “On March 2, 2017, the American Civil Liberties Union of Tennessee intervened in Blanchard v. City of Memphis, a lawsuit challenging the City of Memphis’ creation of a list of people, including multiple members of the Black Lives Matter […]

Readers of our City Council Election blog may have noticed that, instead of writing about Thurston Smith, I inserted a legal disclaimer.   Now I can reveal the full story. On the fifth of July I was served with a temporary Order of Protection (PDF) filed by Thurston Smith.   The order is a tissue of lies, […]